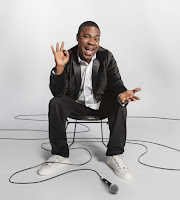 Tracy Morgan is back and bringing his “Picking Up the Pieces” tour to Thrasher-Horne Center in Orange Park.  For seven seasons, Morgan starred on NBC’s Emmy and Golden Globe Award-winning “30 Rock.”  Morgan appeared opposite Tina Fey and Alec Baldwin as “Tracy Jordan,” the unpredictable star of Lemon’s (Fey) hit variety show, “TGS with Tracy Jordan.”  In 2009 Morgan received his first Emmy Nomination for this role, in the Supporting Actor category; he has in six past years also been nominated for a Supporting Actor NAACP Image Award.

While on a standup comedy tour in 2014, Morgan was critically injured in a serious car accident that prevented the comedian from continuing to work and tour.  After months of rehabilitation, Tracy returned in an exclusive interview with TODAY Show’s Matt Lauer where he expressed his grief for the incident as well as his goals to come back to the entertainment world.  In June 2015, Tracy was selected to receive a star on the Hollywood Walk of Fame in the 2016 class.  Starting in September of the same year, Morgan began filming his next role in the upcoming comedy, “Fist Fight”, staring Ice Cube and Charlie Day.

Continuously touring the country doing what he loves the most, stand-up comedy, Morgan has headlined across the country and abroad on various tours and festivals.  He was first introduced to television audiences in his role as “Hustleman” on the hit comedy series “Martin.”  He went on to join “Saturday Night Live” in 1996 where he appeared for seven seasons and created such memorable characters as “Astronaut Jones” and “Brian Fellows.”  After leaving SNL, Morgan went on to star in his own comedy series “The Tracy Morgan Show” and voiced “Spoonie Luv” on Comedy Central’s “Crank Yankers.”  Additional film credits include: “Cop Out,” the remake of the British film “Death At a Funeral,” Dimension Film’s “Superhero Movie,” “First Sunday” opposite Ice Cube and Katt Williams, “The Longest Yard” opposite Adam Sandler, the Wayan’s brothers “Little Man,” “Jay and Silent Bob Strike Back” and “Head of State”.