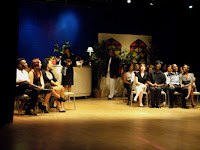 Artistic director, choreographer and writer, Kavin Grant, recently returned to his home in Jacksonville from Temple University after completing his second year of Graduate Studies in Dance. He brought to Florida his tantalizing stage show, “Group Therapy” which portrays an inspiring plot in a two act, nineteen scene production. Seven couples find forgiveness and love, through God, by learning how to understand each other.

Boleros Dance Complex is a befitting establishment that hosted two nights of the play “Group Therapy”. The stage, lighting, props, music, background vocals, choreography and script were marvelous. This is a show that could go straight to Broadway and tour from coast to coast and abroad.

Many lessons were shown about the things that people endure on this earth while in a marital union. Secrets in a relationship can tear a marriage apart, yet honesty has to prevail. The couples in the performance had different issue in their households just as someone we might encounter – deceit, hurt, confusion, misunderstanding, blame, lack of trust and just DRAMA.

Don’t think that the play was serious throughout the evening; there were many
moments of humor that had the whole audience roaring in their seats. Since Kavin Grant is also an expert in dance, there were segments of interpretive dance that told different stories; some of hurt and pain that can come from unforgiveness and other dance moves that displayed passion, hope, grace and victory. 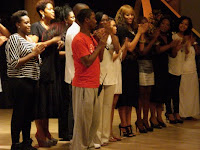 So you don’t miss other Events, you may want to subscribe to Ms. “V”s Blog page and to both the Jacksonville-Christian-Living-Examiner and the Jacksonville Events
Examiner pages.