Public Assistance - To Increase or Not


This was a question posed from my friend Beverly, on Face Book.  It proved to be a very interesting discussion. 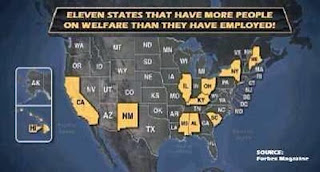 QUESTION Re: Entitlement cuts: “Would you “support” or “protest” a law that said any family currently receiving government assistance would be Denied an Increase in assistance if they had more children while receiving assistance???”

Marina: You can't keep helping people who not only don't help themselves but make things worse for them. Making babies takes effort. You don't have to plan for it, but you have to put out the effort to create it.

Victoria Thomas Poller: If I were still paying taxes, are you asking me if I would give a woman a raise for having more children out of wedlock?

Jimmy: I am 60 percent disabled from Iraq and Afghanistan.  I still work a full time job and the $469 a month I get for food stamps to feed a family of 5 my VA disability pays my rent AND MY job pays the bill combine with my stamps i barely have enough at the end of the mouth and we don’t buy national brand stuff on junk food just the needed stuff and if i have a another child then i feel i should receive some more assistance.

Kennard: I support helping people but if they are trying to help themselves then they don't deserve additional assistance. When the Great Society programs were developed they were intended to be temporary whereas Americans have come to see them as a permanent benefit. I could support some type of restriction.

Kennard: My mom got assistance but she was like Jimmy, she worked.

Beverley: It could be a married couple Ms. V receiving a housing allowance & food stamps

Jimmy: and Mrs. Marina, I can understand that there are those that take advantage of the system and yes if you abuse the system then boo on you but if you are like most Americans that’s struggling and need the extra help and your trimming to do better then why not help them

Victoria Thomas Poller: If I couldn't afford to give my children that I already have a good life, why would I bring more children into this world. I was once a single Mom and I worked, went to school and received "public assistance for a year. I sent the department of public assistance a note to thank them and I never looked back. Welfare (as it was once called) is not a "source" but it is an avenue while other means are obtained.

Rhonda: I would protest. The problem is not that people aren't working who receive assistance. The vast majority of the poor do work. The problem is that companies don't pay a living wage. If they did, there would be fewer people on govt assistance. Not increasing assistance is only going to hurt the children. You are just increasing the number of children in poverty. Besides, it is not a realistic solution. If it were then we would seriously need to talk about funding for birth control measures for families.

Rhonda: Also, it is a myth that most people stay on assistance for years. The reality is that people cycle on and off. When they make enough money to get off, they do.

Jimmy: Now that’s a good thought also Ms. Rhonda.  Our min wage is not enough to support a family of 4 with the basics needed for living. And by basics I mean food, shelter, water

Victoria Thomas Poller: Well BeeBee, you've seem to have started something. Let me know when you think the discussion is over and I may write a column on the subject.

Terry: Support. Unless, legitimately against abortion. However, from a monetary standpoint having a baby while on PA is irresponsible. Strap up or no backup.

Jennifer: Yes, I work very hard for my money and did not get a raise for giving birth to any of my children simply because I got pregnant. why should they?

Mario: I'd support such a law. People have to proactively create kids they don't just happen. It's irresponsible to increase the financial burden on an already cash strapped government when it's completely avoidable. In financially hard times you have to be prudent.

Vicquita: I would not support it. The Bible says if you don't work you don't eat. (2 Thessalonians 3:10) Of course there are provisions for those who need assistance because being a Christian means being charitable. However we are talking about those who are ALREADY being helped. No matter what the family circumstance if you can't take care of the children you have you should not have more. And for those babies that are not planned. As my grandmother would say there is always room for one more. Make due...

Victoria Thomas Poller: Aren't all those things that you mentioned already happening to some of the children on the system? Social workers are already over case loaded.

Beverley: True Ms. V. But I think if such a law were passed, we could see a dramatic increase

Mario: I liken that to rewarding bad behavior though. We are dealing with adults. Not kids. They should know better. To me that like assuming buying kids unlimited ice cream will deter bad behavior indefinitely. You can do it but at some point giving them everything they want will hurt. Either their tummies or your wallet from dentist visits.
You could give them extra money. But there will be consequences.

Beverley: Mario -Where's the compassion for the children? Lolol ;p

Victoria Thomas Poller: Let's just pray that things won't get any worst and that people depend on God to help them and not the system. I'm living proof that following the 'source' is the way to go. He is Jehovah Jirrah and He doesn't have a 'magic wand'. Just saying.

Mario: Okay Bev how about this. If you have more kids while on assistance. The Government takes the child and puts them in the home of someone that's pulling their weight responsibly. You get your child when you start doing likewise. That way the child is taken care of.  I honestly think government needs to create some form of disincentive for people that are on assistance from having more kids. They should do it for people that aren't in a position to take care of kids period. That's my extreme view though.

Victoria Thomas Poller: Mario, I think that's called "Foster Care" or "Adoption" if you desire to make a permanent difference in that child's life.

Marina: While I do believe that there are people on the system who have good intentions and are legitimately needing it to gets their head above water, there can be a question as to how much "help" is actually helping. I live in California where there more people on welfare here than in any other state, 30% of the welfare population and growing. We also offer the highest cash pay-out system over non-financial assistance. I've seen people selling their ebt cards for a cash payout on craigslist. So I see a lot of abuse and those people who are takers will keep on taking. (As OBD said on MTV when he drove over to the welfare dept in a limo: "if the govt is going to give me money, I'm gonna take it." - paraphrased). I have to constantly remind myself that people that abuse the system are really the ones taking from the ones that truly need it and they are the ones that cause the bad judgments on those that are really trying. There's also that part of me that believes that a child who watches their parents struggling to survive by doing the best they can will always be better off than one that expects things to get handed to them when things get tough. Although I concede that I would never want to see a child go hungry. I do have a lot of faith in the will of the people to make success happen even though we may have to go through the misery of failure after failure to achieve it.

Meunda: Protest, that's my darn taxes paying for the bullcrap.