'Gracias Christmas Cantata' coming near you

Information on dates, times and venues are located below.  Don’t think that it’s too early to celebrate the holiday season, because Gracias Christmas Cantata will put you in the mood even if the weather is warm outside.  There is a message in every scene, musical score and drama production that will make you glad that you were in the audience.

By now, you may be asking, “What is a Cantata?”  Cantata means “sung,” and comes from the Italian word “Cantare.”  It is the movement of vocal music of the Baroque era, with a story being told in the background.  Typically, a cantata consists of a voice solo, a voice ensemble, and a chorus.  Gracias Christmas Cantata is a unique blend of performing arts, three musical acts in one: an opera, a musical and a choir all on stage in one night’s performance.  Each act consists of cherished carols, some new compositions, and classical songs that convey the true meaning of Christmas.

Yes, what you hear during this show is a full-piece mega orchestra along with dynamic singers/actors, who vary in ages.  There are video screens on both sides of the auditorium, so you won’t miss any of the dialogue.  For those who are hearing-impaired, the use of the monitors will aid in the interpretation.  The script from the first act (For Unto You Is Born a Savior) is totally Biblically-based from the story of Jesus’ birth.  Act II is a musical (Anna the Matchstick Girl) teaches a lesson about kindness, gratitude and family.  And Act III is a choral presentation of “Handel’s Messiah”.  Some cultures stand during this time in respect for the King of Kings.

The costumes are very colorful and the troupe is amazing for quick-changing of every actor/singer.  There is also audience participation to the songs, “Silent Night” and “God Bless America.”  Don’t miss your chance to bless and be blessed by this musical ministry.

LOCATIONS: East to West Coast
Check HERE for a venue near you

Every show consists of beautiful video screen backdrops and creative mirror images of heavenly hosts, dream sequences and other scenic transformations.
International Youth Fellowship (IYF) USA and Gracias Choir will be back on the road to present the 2016 Gracias Christmas Cantata US Tour across 28 cities (Alaska to Pennsylvania) from September 14th to October 14th.
TICKETS: PRIORITY SEATING $20 or more donation per person.  Priority tickets may be purchased at: International Youth Fellowship in your area.  Priority Entry and seating is only offered to their donors
FREE GENERAL ADMISSION, (you MUST present a ticket).  For tickets contact Christmas Cantata US in your area.  Bring the joy of the season into your heart a little early, with the Gracias Christmas Cantata.  If you desire to make a donation to this wonderful heartwarming ministry, please click HERE.
Posted by Ms. "V" Victoria Thomas Poller at 1:48:00 PM No comments:


If you’re a little sick and tired of all the political bashing that is broadcast on TV and in social media, then it’s time to laugh until you cry.  Jacksonville Florida’s Wilson Center for the Arts will host eight power-packed, politically correct shows from September 20 – 25, 2016 from “The Capitol Steps”.  Don’t allow Hilary or Donald to get you down and out.  Come get your laugh on.

“The Capitol Steps” were born in December, 1981 when some staffers for Senator Charles Percy were planning entertainment for a Christmas party. Ronald Reagan was President when the Steps began, so co-founders Elaina Newport, Bill Strauss and Jim Aidala figured that if entertainers could become politicians, then politicians could become entertainers! Their first idea was to stage a nativity play, but in the whole Congress they couldn't find three wise men or a virgin!  So, they decided to dig into the headlines of the day, and created song parodies & skits which conveyed a special brand of satirical humor that was as popular in Jacksonville Florida as it was on Pennsylvania Avenue.

Since they began, the Capitol Steps have recorded over 35 albums, including their latest, What to Expect When You're Electing. They've been featured on NBC, CBS, ABC, and PBS, and can be heard twice a year on National Public Radio stations nationwide during their Politics Takes a Holiday radio specials.

Quotes about The Capitol Steps: “The Capitol Steps are what Washington would be like if everyone were funnier and could sing.” - P.J. O’Rourke, humorist.  “They’re the best. There’s no one like them, no one in their league.” - Larry King, CNN.  “The troupe has become a favorite on the Washington social circuit.  Its political satire brings chuckles...rave reviews...guffaws...and bipartisan grins all around.  The satire hits the mark.” - The Wall Street Journal.

The Aluminum Show will be in JAX

Tickets for “The Aluminum Show”, that comes to Jacksonville’s Times-Union Center, Moran Theater on Sunday, November 6, 2016, are now on sale for only one performance.  After over a decade of touring worldwide, Aluminum Group is thrilled to present the world premiere of the spectacular, new Aluminum Show. 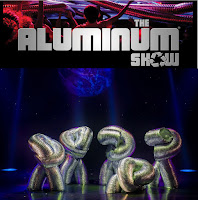 This new and unique show brings the material, the music and the artists together on stage in a magical, mystery-filled creation combining visual theater, dance, and humor into an exciting, multi-sensory experience, the likes of which audiences have never before seen. This is the story of one man’s incredible journey to a parallel universe – a futuristic planet made entirely of aluminum. Aluminum pipes come to life right before the audience’s very eyes, transforming into imaginary, mysterious, and playful characters.

The new show was written and directed by Lior Kalfo, creator of the internationally successful shows Voca People Fantasy, and Glow; with choreography by Ido Tadmor, one of Israel’s foremost choreographers; and under the artistic direction of Ilan Azriel, co-creator of the international Aluminum Show.  The show is suitable for all ages and languages.

‘Sister Act’ delivers a lot of Nunsense to the Alhambra 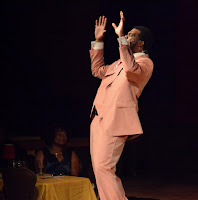 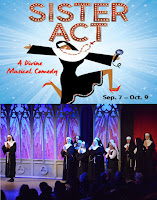 No matter if you’ve seen the motion picture or not, the Alhambra Theater & Dining’s take on “Sister Act” is unique, spectacular and very entertaining.  It’s sassy, high-spirited, comical and you will be thoroughly charmed.  There is so much laughter, great lines and well-delivered music, that you’d better get your tickets today, because Gala night was almost a sell-out event.  This is a great musical for the entire family.

There are also male members who need to be credited with their talents in “Sister Act”.  Joshian Morales*, Peter Jackson, Kurt McCall, David Berry* (too funny as T.J.), Timothy Ellis*, Brandon Garcia (yes, he was a server & bartender who also now acts) and Travis Gerald Young - multiple part actor; rounded out the talented cast.  Some of the male and female members are new, others you might have seen before, yet their appearance in “Sister Act” gives them added credence to their portfolios.

James Kinney* is back as the Choreographer and the high-stepping antics of the troupe can be credited to his genius.  Producer/director Tod Booth* did a wonderful job tweaking the script and adding his flare to the production.  Dave Dionne and Ian Black created smooth transitioning sets that cleverly changed as actors moved into their next scene.  Musical direction is expertly conducted by Cathy Murphy Giddens and you will enjoy each musical score in this two act presentation.  (*Denotes Actors’ Equity Association member).


We would be amiss if the meal, served by Executive Chef DeJuan Roy, wan not highlighted.  Everything that was sampled (see photos) was exceptionally good.  As always, no extra seasonings are needed.  Chef knows what he’s doing and you will leave satisfied.  You’ll almost want to see the show before you eat, because after you’re finished - it will be time for a nap; but that’s the time to order a cup of coffee to go with your delectable dessert

TICKETS: Regular tickets priced from $38 – $62.  Ticket prices include: a plated dinner served to your table, an incredible show and prime parking.  + are available upon request.  Price does not include gratuity or orders from the bar.