'The Price is Right - Live!' will be back in JAX


No foolin’!  The Times-Union Center’s Moran Theater will play host to The Price is Right Live™ stage show, sponsored by VyStar Credit Union.  If you remember the show coming to JAX in 2012, then you will recall the prizes, exciting crowds of possible contestants, and special guest hosts.  This is something that you want to grab your tickets, get your personality ready, to register for a chance to be a contestant on the Moran theater stage.

The Price Is Right Live™ is the hit interactive stage show that gives eligible individuals the chance to "Come On Down" and play classic games from television's longest running and most popular game show.  Contestants can win cash, appliances, vacations and possibly even a new car by playing favorites like: Plinko™, Cliffhangers™, The Big Wheel™, and the fabulous Showcase.

Playing to near sold out audiences for more than ten years, The Price Is Right Live™ has given away over 12 million dollars in cash and prizes to lucky audience members all across North America.  This year, The Price is Right Live™ will be hosted by Jerry Springer and will have prizes that may include: appliances, vacations and possibly a new car!

The Price is Right™ is the longest running game show in television history and is loved by generations of viewers.  This on-stage traveling version gives fans the chance to experience the same fun and winning excitement up close and in-person.  The Price Is Right is produced by: FremantleMedia North America and licensed by FremantleMedia.

“The Price Is Right - LIVE”
DATE: Saturday, April 1, 2017 (No Foolin’)
TIMES: 8 p.m.
LOCATION: Times Union Center Performing Arts
Moran Theater
300 West Water St.
Jacksonville, FL 32202
TICKETS: start at $34.50, and may be purchased online at FSCJ Artist Series sponsored by VyStar Credit Union (the official presenter of the Jacksonville show), or by calling (904) 442-BWAY (2929) between 10 a.m. – 5 p.m., Monday – Friday.  Discounts are available for groups of 10+ by calling (904) 442-2947 or emailing groupsales@fscj.edu.  ***Additional purchase not required for contestant registration.  Open to legal US residents, 18 years or older.  Ticket purchase will not increase your chances of being selected to play.  For complete rules & regulations, including eligibility requirements, visit or call the venue box office.  To enter theater to watch show, a ticket purchase is required.
Posted by Ms. "V" Victoria Thomas Poller at 2:22:00 PM No comments:

'Star' on Fox TV-Sexuality and Christianity: What? 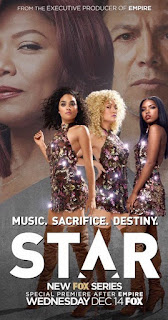 Many people are afraid to talk about homosexuality for fear of being ridiculed, labeled, chastised, hated (the list goes on), so they just keep quiet, bury their heads, or don’t say anything at all.  There’s a nighttime soap-opera (oh, there are many other ones on evening TV, so put down your rocks & please listen to the important issue), “Star”, in its first season on the FOX network.  The show has a character that wants to change from a man to a woman (you’ll have to look up the episode ‘on demand’).  What I found disturbing was the attempt to perform an Exorcism on this person, by a pastor of a local church.  There’s more plots to the show, but this is the focus of this article.  How would you approach a person who is NOT a  heterosexual?


You may want to tag people who question their gender as gay, homosexual, transsexual, transgender, and the classifications go on (with some not-so-nice terms).  Nevertheless, how are Christians, who say they love God, going to badger and belittle a person, as they tell the person that they are going to die and go to hell?  Christians have their Bible scriptures, but What Would Jesus Do in confronting a person who was born one way and have desires for the other gender?  Are we God?  What would Jesus say and do about a Hermaphrodite?  Are we Christians supposed to beat the devil out of other people?  Are we to ignore the person and what they do?  In the words of a familiar show, “What Would You Do?”


There’s an old saying, “You can catch more flies with honey than you can with vinegar.”  Didn’t Jesus show love to those who were NOT like Him?  How are people going to love and follow Christ, if they can’t see the love of Jesus in YOU?  Some of us have family members who are transgender, yet how do we treat them?  Are we ashamed to invite them to dinner, or what about inviting them to church (that’s the last place they might come because of the whispers or looks they would receive - that’s not your church; is it?).  Do we shun them or classify them as outcasts?  How would you handle it if a loved one professed that they were different than you?  Would you still love them or hide them in the closet?  Is casting demons out of the person, the answer or showing that person to a loving God?  We are to lead folks to Christ by our example, and He gets the increase. 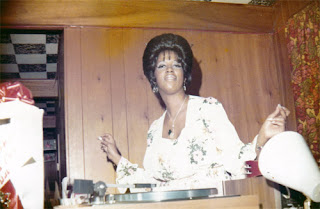 Years ago, when I was a barmaid, we had a “Pearl Box Review” (men who dressed and performed as women) come to town.  They needed a place to stay and I was single, with a four-bedroom house; so, I had them stay with me.  That was a time that I hold dear.  It was like having a group of sisters around.  We ate, cooked, shopped, drank and had fun together.  That was then!  Today, I would have to check with Hubby and they could probably afford a hotel room, but the fact remains that these are still people (don’t be asking my Husband what he would do), and they have feelings.  Some of you readers might be saying, “They wouldn’t be in my house.”  Well, shame on you!  Did Jesus do that?  He got upset with the money changers at the temple, but who’s to say that He didn’t have a glass of wine with them at another time. 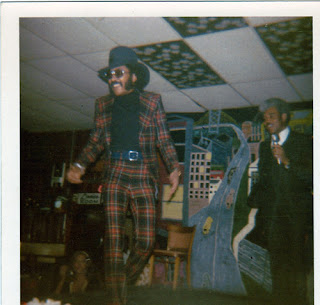 My question to you is, “How does a Christian approach and treat a person who appears to be one way, yet feels that they are the other?  What would you do?  Are we Christians so heavenly bound (going to heaven no matter what), that we’re no earthly good?  Are we willing to seek that one lost sheep from the herd and show them the Good Shepherd? Sometimes one situation can lead to another less favorable conclusion.  What will happen on the season finale of “Star” and will you judge less you be judged?
Posted by Ms. "V" Victoria Thomas Poller at 3:15:00 PM No comments:

There are NO bad seat under the BIG blue and white tent.  It’s large enough to house a, yet intimate enough to see everything from all angles.  The two-hour show was preempted by numerous vendors selling: popcorn, pinwheels, flashing snow-cone drinking cups, cotton candy, and they also have a funnel cake station, nacho and a place where your little ones can get their face fully-painted, to look like the performers on stage.

“Cirque Italia” presents “Aquatic Spectacular.”  The name reflects a unique attribute under the tent, as the show features a custom designed water stage that travels from city to city. The stage holds 35,000 gallons of water that flows, bounces, waves and sways while thrilling the audience with every droplet.  With this unique feature under the big tent, guests will be surprised how it’s a show of its own that moves with the background music. 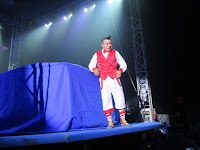 This 40 foot Broadway circular style stage is 4 feet height and contains 35,000 gallons of water inside.  During the show, audience members will be surprised when the lid lifts up 35 feet in the air while a curtain of rain and fountains dance with each performance move! 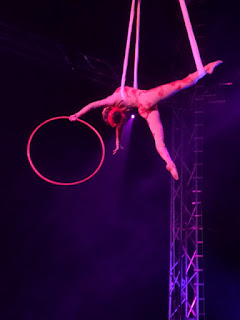 Some of the performances of the east and west venues include: Coco the Clown from Argentina, who kept the crowd totally amused while the stage was being converted for the next act.  He and his brother came out into the crowd, and around the stage with a little bit of water, popcorn and many laughs.  There was a Contortionists atop an 8-foot platform mesmerizing the audience; a Hula-hooping balancing act in the center of a ring of water; the Juggling Fusco Twins (Guinness Book World Record Juggling 5 clubs for longest time at 57 minutes), and now tosses and catches many more items.  Then there is the performer who juggles eight rings at once and never misses a beat. 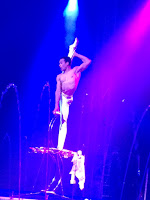 If you have any clout in your city, it would behoove you to get this show to come to your town, so that you and your family will enjoy this unusually delightful treat; and no animals are used for entertainment. 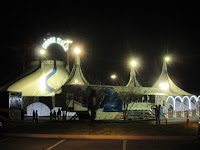 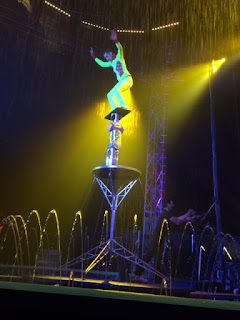 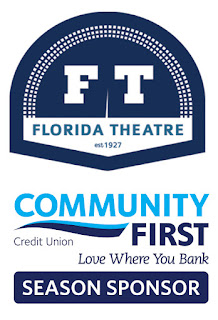 Now that Daylight Saving time has come, there will be more evening light for you to go downtown and experience what the Florida Theatre has for the remainder of March.  The winds may be blowing, but it’s a breezy time to see a wonderful show.  Take a look at what you can still see on stage.  There’s something for everyone!