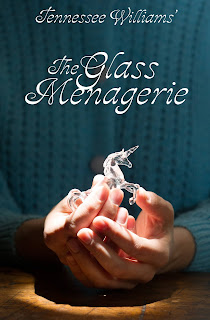 Since taking over the helm of the storied Alhambra Theatre & Dining, Managing Partner Craig Smith has wanted to produce a Tennessee Williams play, and on February 24, 2021 he will get his wish as the Alhambra opens his most famous one, “The Glass Menagerie”. The Alhambra has built its reputation on exceptionally casted and produced musicals and musical comedies, and has rarely mounted what theater fans call a “straight drama.” Audiences can expect the same astounding talent and set quality it is used to (and food), but with a slightly different theatrical experience overall. Referred to typically as a “memory play, The Glass Menagerie premiered in 1944 and is credited for catapulting Williams from obscurity. The play has strong autobiographical elements, featuring characters based on its author, his histrionic mother, and his mentally fragile sister Laura.

In the script for The Glass Menagerie, Williams sets the show’s tone through the main character, Tom Wingfield, “The play is memory. Being a memory play, it is dimly lighted, it is sentimental, it is not realistic. In memory everything seems to happen to music. That explains the fiddle in the wings. I am the narrator of the play, and also a character in it. The other characters are my mother Amanda, my sister Laura and a gentleman caller who appears in the final scenes.  The scene is memory and is therefore non-realistic. Memory takes a lot of poetic license. It omits some details; others are exaggerated, according to the emotional value of the articles it touches, for memory is seated predominantly in the heart.”

The Alhambra will continue its 2021 season with limited seating due to its policy of strictly adhering to COVID-19 protocols. “Our role in this community is to provide entertainment and a respite for our family of guests,” said Smith. He continued, “We will always put their experience first, and this is what they told us they wanted.” With Season Partners having renewed at an even faster pace than for 2020 and hosting a sold-out season opener with Singin’ in the Rain, Smith feels reassured in the decisions he and his team made. “We’re delighted to make the seating work, and even more delighted that our guests are responding with such love and support.”

TICKETS: Prices start at just $48 per person.  Ticket prices include: a plated three-course meal that changes for each show, and is served directly to your table; a Broadway-style performance and complimentary parking.  Tickets may be purchases on line, or by calling (904) 641-1212.
**Prices do NOT include gratuity, professional photos, nor orders from the bar**

As WJCT continues to move toward production and distribution of its services across a wide range of digital technologies, its brands are also evolving to reflect this new media landscape. The programs that currently air on WJCT-TV are now available on platforms beyond the broadcast television channel, and it’s new name reflects this new multi-platform environment.

The Jax PBS brand aligns with growing demand for content across multiple platforms and expanded services available through WJCT Public Media, including live streaming content at wjct.org, the WJCT app, on-demand streaming through Jax PBS Passport, and distribution through both traditional TV providers such as Comcast and AT&T and new “virtual” multi-video program distributors (vMVPDs) such as YouTube TV.  Jax PBS will continue to be available as a broadcast channel found in channel position 7.1.

“WJCT-TV has been your trusted source for the very best in education, entertainment and news programming for more than 60 years. But as the way we all watch evolves so will our name. WJCT-TV will become JAX PBS beginning February 24, 2021. New name, same mission: educate, involve, inspire,” explained David McGowan, President and CEO of WJCT Public Media.

The identity will be implemented through a refreshed logo and new identity graphics. Other channels broadcast and distributed by WJCT Public Media will also reflect the new brand, including Jax PBS More!, Jax PBS Kids, Jax PBS WORLD and Jax PBS Create.

This rebranding is the first change to the station’s public name in its history. WJCT debuted in September 1958 as an educational television broadcaster, and became a member station of The Public Broadcasting Service (PBS) in 1969.

The PBS brand is synonymous with trust and value. For the 18th consecutive year, PBS has been named America’s most-trusted institution ahead of commercial cable and broadcast television, newspapers, and digital platforms. Americans view PBS as a destination for journalistic integrity, exceptional content, and incredible storytelling appealing to a diverse range of people in the community. Families turn to PBS Kids as a trusted and safe source over other children’s media providers for high-quality, educational programming and resources that inspire and prepare children for success in school. The trust that Americans place in the PBS brand, along with its widespread recognition, led WJCT Public Media's to work with PBS to develop the local Jax PBS brand as WJCT updated the identity of its television services.

“In the more than 60 years since WJCT-TV went on the air, many things have changed — including the ways and places we all watch 'TV'” said McGowan. “Rebranding this service as Jax PBS reflects those changes, while also making us easier to find and identify in a crowded media landscape.  WJCT is much more than a traditional over-the-air broadcast channel, and we are proud to adopt Jax PBS as a name that better reflects our multi-platform future.”

The Federal Communications Commission (FCC) designated call letters for Jax PBS (WJCT) will remain the same. The programming lineup will not change as part of the rebranding initiative. For more information, visit jaxpbs.org.