Seeking a gift for those football enthusiasts?  Don’t leave that sports fan from your Christmas list.  Something BIG is happening right here in Jacksonville, Florida.  For the third time in as many years, Jacksonville Jaguars’ EverBank Field will once again host the Blue-Grey All-American Bowl on Saturday, January 13, 2018. The action will be broadcast live via ESPN3 at 1:00 p.m. EST.

In its sixth year on the national level, this year’s Blue-Grey All-American Bowl will feature the country’s top recruits from the Class of 2018. The annual Blue-Grey All-American Bowl positions a team of high school standouts from traditional northern states against a team of exceptional athletes from traditional southern states. Blue-Grey Football was established in 1989 to help prep prospects from across the country receive national exposure and increase their chances to secure college scholarships.

In advance of the post-season game for elite level prep prospects, and in conjunction with SMG Jacksonville, Blue-Grey Football held its Jersey Presentation Tour on December 11, 2017 at EverBank Field.  NFL veteran and former Jaguars’ quarterback, Quinn Gray, was in attendance for the ceremony to recognize several local products, as well as multiple Florida natives.  This year’s participants are as follows:

Tickets are $20, inclusive of fees and will be available at the EverBank Field Box Office at the East Club Gate on gameday.  Parking for this event will be in Lots C & D, which will open at 10:30 am.  The parking fee is $5 per car (cash only).

Historical honor to be given to Clara White Mission founder 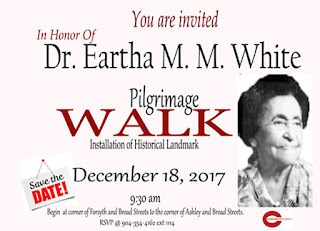 As a tribute to the life and legacy of Clara White Mission founder Dr. Eartha M.M. White; a historical walk from Forsyth to Ashley Street will be held in her honor.  Dr. White achieved much within her 97 years and those accomplishments will be detailed during the unveiling ceremony on Monday, December 18, 2017 at 9:30 a.m.  The walk will begin at the corner of Forsyth and Broad Street to corner of Ashley and Broad Street, ending at 613 West Ashley Street.

With the support of Mayor Lenny Curry and the Jacksonville City Council special legislation was passed to bestow this honor upon Dr. Eartha White in November of this year. The unveiling will occur upon conclusion of the walk.  Mark your calendars and make plans to celebrate a milestone.

Dr. Eartha Mary Magdalene White, born on November 8, 1876; displayed a lifelong commitment to helping others and serving humanity.  Known for her philanthropic and mission work, this Jacksonville native, tirelessly and passionately cared for the homeless community through her charitable work of providing meals, housing, hospital, nursing home and boy’s homes to those in need.

Dr. White was recognized nationally for her charitable work, before and after her death.  In 1970, at the age of ninety-four, she received national recognition as a recipient of the 1970 Lane Bryant Award for Volunteer Service and in 1971, she was appointed by President Richard Nixon to the President's National Center for Voluntary Action. She deserves the heroic recognition for her work locally, state-wide and nationally.

The Clara White Mission continues to assist Jacksonville's homeless and economically disadvantaged people to gain new perspectives on their lives. Their daily meals, youth services, job training (Culinary Arts, Janitorial and Electrical), employment placement, housing and more are the first steps to a new beginning for each participant.
Posted by Ms. "V" Victoria Thomas Poller at 8:33:00 PM No comments: