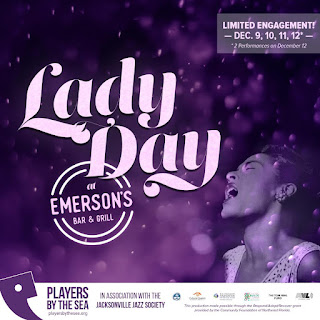 Players by the Sea is thrilled to announce their special run of “Lady Day at Emerson’s Bar and Grill” from December 9, 2021 through December 12, 2021. Tickets are available for $35 and may be purchased online at playersbythesea.org.

About the play: It’s March 1959. Just four months before her death, the legendary Billie Holiday is performing one of her final performances in South Philadelphia. She sings at a run-down bar accompanied by Jimmy Powers on the piano and shares stories about her life. The audience experiences more than a dozen musical numbers interlaced with sass, humor, and nostalgic moments that portray the riveting lady who was Lady Day.

This version of the play written by Lanie Robertson and directed by Ramona Ramdeen, stars Desiree Montes, an AEA Equity Singer, Actress, Dancer, and Voice-Over Artist who contributed to the Central Florida entertainment industry for over 15 years. With musical direction by Jacksonville’s own Meachum L. Clarke, who will also play Jimmy Powers, Holiday’s longtime friend and accompanist. Meachum L. Clarke is a gifted singer/songwriter, musical director and worship leader known for his contemporary gospel ensemble True Purpose.

“I am so honored to portray a performed that has inspired me in my own career,” Montes said. “Billie Holiday was not only a beautiful singer, but also a powerful woman of color who opened doors for many others, like me.”

Christmas time 2021 at the Cummer Museum 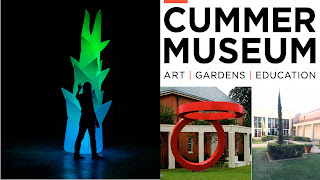 Do you hear the sound of reindeer on the roof? Well, if you don’t, then you need to know that it’s almost time for the jolly old man to make his presence known. Come to the Cummer Museum of Art & Gardens as you experience a little holiday cheer.Events & Programs for December 2021:

Look at That! Discover the joys of close looking. Dec. 8, Momentous Movement from Noon to 1 p.m. Free | Registration required.