Musical group 'Ambrosia' will be in JAX for 1 night 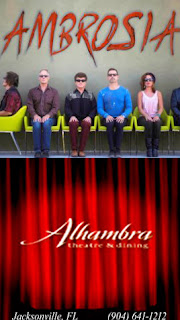 In their continued effort to maximize intimate settings, offer exciting entertainment to their guests, and celebrate their 50th Anniversary season, the Alhambra Theatre & Dining is hosting the popular 70’s rock band, “Ambrosia”.  With its roots in the California rock scene, Ambrosia had five hit singles which included: “Biggest Part of Me,” “You're the only Woman” and “How Much I Feel,” each of which were nominated for Grammy® Awards.

Back in the year 1970, four young musicians from the South Bay of Los Angeles, came together to create a new invigorating style of music.  Exploring the possibilities of progressive, classical and world influences, yet rooted with the soul of the blues and R&B, Joseph Puerta, Christopher North, David Pack and Burleigh Drummond created a new sound that was defined and recognized as “Ambrosia.”

Originally labeled as America’s answer to the progressive invasion of such English acts as “Yes” and “King Crimson,” the group quickly proved it was much more as its albums painted aural landscapes covering the gamut of musical styles and attracting the collaboration of such cultural icons as, Leonard Bernstein, Kurt Vonnegut Jr. and Alan Parsons. 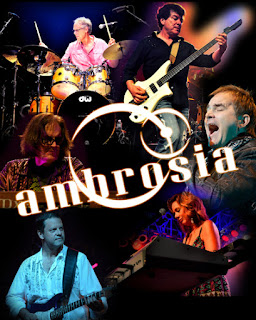 In its brief recording history, “Ambrosia” garnered five Grammy® nominations, five hit singles, heavy FM airplay and the admiration and respect of the musical community.  All this was in addition to sold out concerts around the world.  Today, the band is more alive and compelling than ever.  With three of the original members plus the addition of guitar ace Doug Jackson on electric guitar and backing vocals, Mary Harris contributing amazing keyboards and vocals, and the powerful and contemporary lead vocals and acoustic guitar of Ken Stacey, Ambrosia is exploring new musical territory and continuing to impress life-long fans and new converts alike.

Check here to see if the group will be coming to a venue near you.
Posted by Ms. "V" Victoria Thomas Poller at 3:59:00 PM 2 comments: 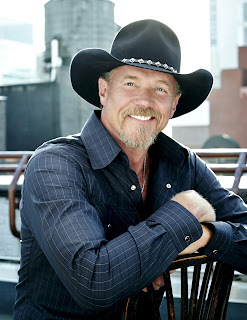 With over 11 million in album sales, three Grammy nominations, and dozens of major motion pictures and television credits to his name, Trace Adkins always has something going on. It is that constant motion and creative diversity that has fueled his latest music, the much-anticipated forthcoming and aptly titled Something’s Going On – his 12th studio album was release on March 31. Something’s Going On marks Adkins’ first album release on his new label, BBR Music Group / Wheelhouse Records.  Although the first single off Something’s Going On, “Watered Down,” went to Country radio on March 13, fans can view the lyric video HERE, featuring Adkins enjoying a simpler life and slower pace on his Nashville farm.
"When I first heard 'Watered Down' I felt an immediate connection with what I wanted to say. A man comes to a point in his life where he begins to reflect on his past and what he’s learned and that's what fueled this song," shares Adkins. "If you've led the kind of life I've led, at some point you have to temper your vices."

It’s been four years since Adkins’ last studio album Love Will… released in 2013, which debuted in the top ten on Billboard’s Top Country Albums chart, and fans have eagerly awaited this follow up ever since. Some of Nashville’s favorite and most respected songwriters contributed to the range and inspiration of Something’s Going On, boasting credits such as Tyler Farr, Craig Campbell and Shane McAnally to name a few.

Adkins’ trademark baritone has powered countless hits to the top of the charts. The three-time GRAMMY-nominated member of the Grand Ole Opry is a TV personality, actor, author, and spokesman for the Wounded Warrior Project and the American Red Cross, for whom he raised over $1.5 million dollars as winner of NBC’s All-Star Celebrity Apprentice.

In recent years, Adkins has performed for our service men and women across 11 USO Tours, with his 12th scheduled for spring 2017. In his 2007 autobiography, A Personal Stand: Observations and Opinions from a Freethinking Roughneck, he recounted his rise to fame, brushes with death, and battles with personal demons. Trace has played a tough as nails biker in The Lincoln Lawyer (starring Matthew McConaughey), a desperate father in Deepwater Horizon (starring Mark Wahlberg) and a wise oracle of a tattoo artist in the family-friendly film Moms' Night Out (starring Patricia Heaton, Sean Astin, Sarah Drew).

'DreamGirls' opens at the Alhambra Theatre and Dining

"And I am telling you, you're gonna love me," and you’re going to love the hit show “DreamGirls” that will be appearing on stage at the Alhambra Theater and Dining from April 12 — May 21.  It’s not just about singing, dancing and the performing, DreamGirls takes the audience on a behind-the-scenes rags-to-riches journey in entertainment industry - the business part of show business that made possible this cultural phenomenon.  DreamGirls marks the musical contribution to America that we are beginning to understand today.

Following the story of a young female singing trio from Chicago called "The Dreams," who become music superstars, DreamGirls is a show about a time in American musical history when rhythm and blues blended with other styles of popular music creating a new American sound.  Act One is set in the fabulous sixties, a time when people were still screaming at Elvis and listening to The Beatles, but were dancing to the new beat of countless groups like The Supremes, The Marvelettes, The Temptations and The Shirelles.  Act Two shows the creation and the arrival of disco, another new turn in American pop music.

DreamGirls opened on December 20, 1981, at the Imperial Theatre on Broadway, and was then nominated for 13 Tony Awards, including the Tony Award for Best Musical, and won six. It was later adapted into a motion picture from DreamWorks and Paramount Pictures in 2006.  "And I Am Telling You I'm Not Going" was a number one single on the Billboard R&B charts in 1982. For the Dreamgirls original cast recording won two Grammy ® Awards, including Best Musical Album and Best Vocal Performance.  The 2006 film won two Academy Awards, including a Best Supporting Actress nod for Jennifer Hudson.

While the show has been likened to the story of Diana Ross and The Supremes, writer Tom Eyen denied that he had The Supremes in mind when he wrote the book. He is quoted as saying in 1986, “I didn't grow up with The Supremes...I grew up with the Shirelles. Dreamgirls isn't about any one group. It's a cavalcade of Motown singers: The Shirelles, the Chiffons, Martha and the Vandellas, Little Richard and Stevie Wonder. All these characters are larger than life.”

TICKETS: Prices range from $38 – $62.  Ticket prices include: a plated dinner served to your table, an incredible show and prime parking.  Group sales of 20 + are available upon request.
**Price does NOT include gratuity or orders from the bar**