Originally from Clarkston, GA, Mullins’ critical breakthrough came in 1998 with his song "Lullaby,” from the album Soul's Core, as it became a radio and video hit.  Also from Soul’s Core, "All in My Head," was featured on the hit television sitcom Scrubs. Another hit single, "Shimmer," was included on the soundtrack for the TV show Dawson's Creek.  "Shimmer" was also used in Australia as part of its promotional campaign during the Sydney 2000 Summer Olympics and is still considered in Australia as the unofficial anthem of the games. 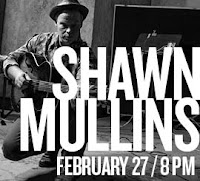 "My Stupid Heart" is Mullins’ ninth studio album.  Coming off a tour of music festival performances, Mullins is wrapping up his US tour that included stops in Atlanta, New York, Tampa and Washington, DC, and found some time to fit in a show at America’s longest running dinner theater.  The Alhambra has produced several tribute artist shows commemorating artists like Elvis Presley, Neil Diamond, The Carpenters and John Denver, and even hosted The Amazing Kreskin, but this is its inaugural foray hosting a contemporary artist on his current tour.

“When we started the concept of Alhambra After Dark, artists like Shawn were exactly what we had in mind” said Alhambra Managing Partner, Craig Smith.  “Shawn is a big-time performer who owns our kind of room: intimate and authentic.  It’s taken us a while to perfect that vibe, and we’re excited to host acts of Shawn’s caliber.  He’s a Grammy-nominee on our stage.  It’s a bit of a milestone for us as we continue trying new things to celebrate our 50th anniversary.”

Said Director of Operations and talent coordinator, Gary Smith, “From a business perspective, we’re hoping the music industry takes notice of this room.  Everyone who has played here comments on how hip, cool and intimate it is.  Plus, artists like Shawn will help us draw some folks who have not been here before.  Shawn is just the first such artist to play our room.”

'Twyla Tharp' will be at the Times Union very soon

Update: February 21, 2017.  Due to unforeseen circumstances the Twyla Tharp show has been cancelled.  Please call the Times Union Center for the Performing Arts if you have further questions.

Coming to Jacksonville’s Times-Union Center for one performance only, “Twyla Tharp” –one of the century’s most treasured artists –continues to celebrate her 50th anniversary of groundbreaking creativity and dance making with an evening of classic and new work.

The program begins with Preludes and Fugues (2015), a work for twelve set to J.S. Bach’s encyclopedic score for piano, the “Well-Tempered Clavier.”  The dance radiates with Tharp’s generous spirit, humanity and rigor as dancers move through duets, trios, and ensembles.  Closing the program is Tharp’s beloved Nine Sinatra Songs from 1982 with music by Frank Sinatra and glittering costumes by Oscar de la Renta.

The work presents a glamorous portrait of seven couples that traces the arc of romantic relationships.  The dancers swing, swirl, tango and cha-cha through a ballroom, displaying Tharp’s mastery of technique and imagination.

'Jersey Boys' comes back to JAX: Oh What a Night!

Jacksonville’s return engagement of the Tony, Grammy and Olivier Award-winning hit musical JERSEY BOYS, the story of Frankie Valli and The Four Seasons, is quickly approaching.  The musical, presented by FSCJ Artist Series, will make its much-anticipated return to Jacksonville to play the Times-Union Center from February 14 – February 19, 2017.

JERSEY BOYS is the story of Frankie Valli and The Four Seasons: Frankie Valli, Bob Gaudio, Tommy DeVito and Nick Massi.  This is the true story of how a group of blue-collar boys from the wrong side of the tracks became one of the biggest American pop music sensations of all time. They wrote their own songs, invented their own sounds and sold 175 million records worldwide - all before they were thirty. The show features all their hits including “Sherry,” “Big Girls Don’t Cry,” “Oh What A Night,” “Walk Like A Man,” “Can’t Take My Eyes Off You” and “Working My Way Back To You.”

The JERSEY BOYS US National Tour opened to rave reviews in San Francisco on December 1, 2006, and is still breaking house records in cities across North America.  JERSEY BOYS is currently playing in New York; Las Vegas; London; and in cities across North America and the U.K . on National Tours.  The show is produced by Dodger Theatricals, Joseph J. Grano, Tamara and Kevin Kinsella, Pelican Group, with Latitude Link and Rick Steiner.

JERSEY BOYS is not recommended for all ages.  The show contains smoke, gun shots, strobe lights, drug references, sexual situations and authentic "profane Jersey language," and is recommended for ages 12+.