'Kinky Boots' walks all over JAX with style 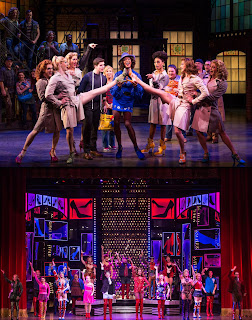 Talk about having a figure better than some females, the ‘Angels’ of “Kinky Boots” (Joseph Anthony Byrd, Tony d’Alelio, John J. Dempsey, Ian Gallagher Fitzgerald, Xavier Reyes and Andy Richardson) can kick higher, sing better and perform to the upmost of their ability in showbusiness.  Talk about ‘Legs for Days’, these actors are stacked and quite fit.  Some of the JAX cast are the spitting image of the cast on Broadway.  Take a look at the video and see if you can tell who’s who in the U.S. Tour cast.


In the orchestra pit is an eight-piece band that carries the music for the entire show.  The guitarists playing “Take What You Got” really stands out - almost as a soloist.  It’s not entirely a musical, nonetheless, the musical numbers are fabulous and very entertaining throughout the night. 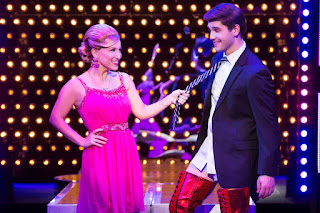 Now let’s discuss the magnificent choreography, costumes, and makeup.  As stated above, the dancers jump, spin and strut-their-stuff throughout the evening.  Makeup has to be extra special when transforming a man into a spectacular beautiful woman, and their transvestite makeup is impeccable.  The costumes of “The Angels” and Lola are dazzling and the finale will attest to that fact. 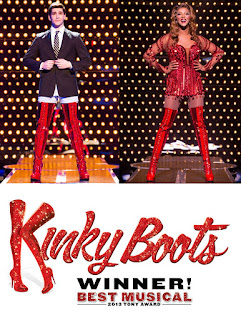 Curt Hansen (Charlie Price) also had to be physically fit as he ascended and descended the stairs of Prince & Son; and let us not forget his donning a pair of stiletto red boots at the end.  As the collaboration between this shoemaker and the Kinky Boot designer (Lola) unfolds, the characters come up with a solution for a failing business.

Timothy Ware (Lola and Simon) has an impeccable British accent, his acting is superb and visual presence as a woman is lovely.  It was noticed that Lola did not have long nails, but how could he when the role called for so many wardrobe changes during the two-act play.

Kudos go out to the factory workers especially Aaron Walpole (Don) who appears to be the foreman of the factory, and he almost sacrifices his honor in a battle of fisticuff with Lola.  What a spectacular dance routine when the cast maneuver back and forth on moving treadmills.  It’s a sight to see.  There are also many funny lines and dance numbers from those in the factory. 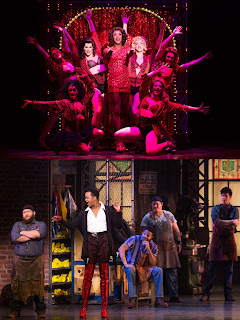 This show may have many people speculating what type of crowd and what type of people will be attending, nevertheless, it is not recommended for children (even though there are two child actors at the beginning and in the end of the show.  The subject matter may be controversial, yet the actors are wonderful.  You probably seen this production advertised on every local TV channel and guest appearances on some local shows, so you might want to add some tickets for this weekend.

Free Romanza concert in St Augustine May 5 to 12 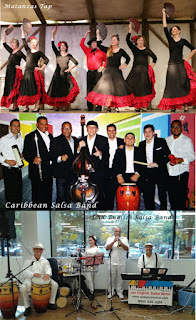 There is so much going on this month at the Romanza Festival and May is the time to get your party started.  A variety of regional bands will be on stage May 5–12 during “A Little Night Music” - concerts held on the gazebo stage in the Plaza de la Constitucion and on the Colonial Oak Stage in the Colonial Quarter, both venues located in downtown St. Augustine.  These FREE live music celebrations are held during the Romanza Festivale of the Arts, a celebration of art and music in America's Most Romantic City, features 100 events and exhibits by dozens of organizations from May 5 (Cinco de Mayo) through May 14.  Concert-goers are invited to bring lawn chairs and blankets for seating for the Plaza events.  See the Schedule HERE for “A Little Night Music.”

Festivale Opening Cinco de Mayo Concerts: Luis Mario Peral and The Rumba Kings: Friday, May 5 from 5:30 – 7 p.m. at Plaza de La Constitucion Gazebo, 1 King Street. Luis Mario Peral & his Rumba Kings will bring their Latin-flavored music to the Plaza as Festivale opens on the night of Cinco de Mayo Luis Mario, who is a singer and composer from Cuba, and his 5 band members have been playing in St. Augustine for the past 20 years, covering many city events and area restaurants.  Peral's Latin Jazz Band consists of very talented musicians who perform Rumba, Flamenco, Salsa, and Mambo.  Luis Mario will have you dancing to his music which also includes a twist of English/Spanish rhythms. 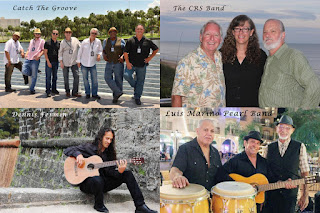 Take another look at the schedule and photos from May 5–12 during “A Little Night Music”.  Don’t miss any of this FREE entertainment in the Oldest, historic city in the state of Florida or anywhere around.
A Little Night Music: “The CRS Band in the Gazebo”: Friday, May 12 from 5:30 – 7 p.m. at The Gazebo, Plaza de la Constitucion, King Street.  Enjoy an incredible evening of music which begins with the CRS Band in the Gazebo at 5:30 pm!  Bill Sabo, Elizabeth Roth and Jim Carpenter have been making music together as part of the faculty of the Florida School of the Deaf and Blind" and are well known for their brand of sing-able and danceable music in St. Augustine and surrounding venues. 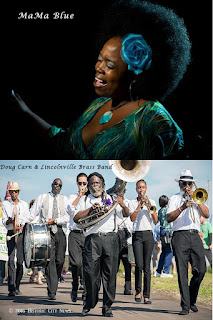 A Little Night Music: Mama Blue and Friends: Friday, May 12 from 7 – 9 p.m. at The Gazebo, Plaza de la Constitucion, King Street.  Mama Blue, the Sultry Sister of Soul, will be performing tonight with her incredible band and backup singers.  With her signature flower in her hair, Mama Blue (Sarah Sanders) exudes personal warmth and a classy style.  Her performances at the St. Cyprian's Jazz Services have brought down the packed house and people have been standing in the aisles.  Mama Blue is a graduate of the Douglas Anderson School of the Arts and is widely known along the First Coast for her song stylings.

Don’t miss any of the FREE festivities this and next week!
Posted by Ms. "V" Victoria Thomas Poller at 6:27:00 PM No comments: