The FSCJ Artist Series, sponsored by Chase, will kick off the “19th Annual Open House” at the Times-Union Center.  On Wednesday, September 14, 2016, doors will open to the public from 4 – 8 p.m.  This will be a perfect evening for families and arts lovers in Jacksonville.  Local food trucks What’s the Catch, Salty Dog, and Nitrogen Creamery will be onsite serving up delicious eats and treats.  Door prizes, a complimentary wine tasting, a cash bar, and live music from The Chris Thomas Band will round out the evening.  Plus, attendees will get an extra special sneak peek at the upcoming season with a special performance from the Tony Award®-winning Best Musical, KINKY BOOTS.


The theater will also be open to the public to allow attendees to test drive seats available for subscription for the upcoming season. The FSCJ Artist Series will have staff on hand to answer any questions about subscribing or the shows in the season. Attendees will also be able to purchase any available seat for subscription during the event.

The first 100 people to RSVP to artistseries2@fscj.edu today, receive a free gift (Gift must be picked up at the event) when they arrive at the event!  Complimentary parking for all attendees of the Broadway Season Kick Off will be provided by LAZ at the Enterprise Parking Garage.  Attendees can park in the garage and stop by the FSCJ Artist Series Box Office to receive a parking ticket before leaving the Times-Union Center.  Current Broadway season subscribers will be able pick up their season tickets, exchange their tickets, buy single tickets for family and friends, and “test drive” their seats during the event.

DATES & TIMES: Performances for each of the four Broadway shows in the subscription package are Tuesdays through Thursdays at 7:30 p.m., Friday and Saturday evenings at 8 p.m., Saturday afternoons at 2 p.m., and Sundays at 1:30 p.m. and 7 p.m. All times are subject to change.  An American Sign Language interpreted performance for the deaf is available for the Sunday evening performance of each presentation.

LOCATION: Times Union Center Performing Arts
Moran Theater
300 West Water St.
Jacksonville, FL 32202
TICKETS: Call (904) 442–BWAY (2929) between 10 a.m.–5 p.m., Monday–Friday.  New subscribers can order their season tickets to receive priority seating!  4-Show season subscriptions are on sale now starting at just $137.  Subscription prices vary depending on the show time, day of the week, and seating location.  Season subscriber benefits include: savings off day-of-show pricing on individual tickets, premium seat locations, priority access to tickets for friends and family before the general public, discounted exchanges, access for other FSCJ Artist Series events, and lost ticket replacement.  VIP Seating is available to contributors to the FSCJ Artist Series at five levels: Angel, Producer, Benefactor, Patron, and Donor.  Tickets to individual shows in the FSCJ Artist Series’ 16/17 Broadway in Jacksonville season, sponsored by Chase, will go on sale this fall and winter, but season subscribers have access to tickets for any show in the series now before they go on sale to the public.  Broadway subscribers will also be able to purchase tickets for other FSCJ Artist Series events, including Broadway Specials, Concert and Variety, Dance, Opera, and Family shows at the Kick Off Event.
Posted by Ms. "V" Victoria Thomas Poller at 1:01:00 PM No comments:


Fresh from the Rio games in Brazil, this African-American Gold/Silver/Bronze winner is a star in the making. Consider highlighting how her status skyrocketed as a relatively unknown athlete from Sandhill, Mississippi into a gorgeous rising star featured in publications from Elle Magazine and Sports Illustrated, to a recent Stella McCartney campaign, and even new collaborations with Adidas.

Her recent Olympic gold medal win makes her a triple Olympic medalist- after only competing for two years. It places her among our best U.S. women sprinters. That's the stuff heroes are made of. Especially when you consider she is not just another athlete coming back from Rio with a medal, but a young woman with a riveting backstory-one of heartwarming triumph born out of story which began from humble beginnings in Sandhill, Mississippi's foster care system.

Later in life, the two sisters were urged by a high school basketball coach into track and field. Tori took off flying and has paved a series of successful wins at every turn, from the 2011 NCAA Indoor and Outdoor Championships to victories in Rome, New York and the Rio games.  It places her as number #1 in the U.S. and number #2 in the world, leading USA Today to describe her as "The breakout athlete of the Rio Olympic Games." 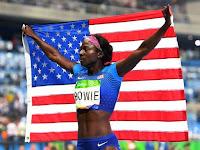 As a graduate with a degree in psychology, and an avid reader, she is an outstanding role model, with stories from the heart about what it takes to face miles of odds that may try to keep you back.  Watch and see what this Olympian does next.
Posted by Ms. "V" Victoria Thomas Poller at 11:35:00 AM No comments:

‘Sister Act’ opens at the Alhambra Theater and Dining in JAX


Synopsis: Sister Act is the feel-good musical comedy smash based on the hit 1992 film that has audiences jumping to their feet!  Featuring original music by Tony- and eight-time Oscar winner, Alan Menken (Newsies, Beauty and the Beast, Little Shop of Horrors), this uplifting musical was nominated for five Tony Awards, including Best Musical. When disco diva, Deloris Van Cartier, witnesses a murder, she is put in protective custody in the one place the cops are sure she won't be a found – a convent!  Disguised as a nun, she finds herself at odds with both the rigid lifestyle and uptight Mother Superior.  Using her unique disco moves and singing talent to inspire the choir, Deloris breathes new life into the church and community but, in doing so, blows her cover.  Soon, the gang is giving chase, only to find them up against Deloris and the power of her newly found sisterhood.  Filled with powerful gospel music, outrageous dancing, and a truly moving story, “Sister Act” is a sparkling tribute to the universal power of friendship.

About the Menu: As he does for each Alhambra show, Executive Chef DeJuan Roy has created a menu inspired by the story and music of Sister Act.  The First course features: a choice of white bean, kale and turkey sausage soup: or spinach salad with apples, raisins, red onions, warm bacon vinaigrette; the Second course features: a choice of roasted lemon chicken with garlic and herb red potatoes and Italian-style green beans; or Chimichurri-braised pork with baked barbecue black-eyed peas, white rice, garlic and Texas toast; or fried triggerfish with tomato cheese grits, Brussels sprout slaw and a lemon herb aioli; or house-made pirogi & vegetable Stew.  The Dessert course includes: a choice of Dutch Apple Pie with warm caramel, or Banana Split Cake, or fresh fruit, or chocolate mousse, or sherbet.

Based on the 1992 movie which starred Whoopi Goldberg, Sister Act originally opened in London's West End in 2009 and debuted on Broadway in 2011.  The show was nominated for 14 Laurence Oliver, Drama Desk and Tony® Awards. 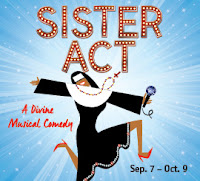 TICKETS: Regular tickets priced from $38 – $62.  Ticket prices include: a plated dinner served to your table, an incredible show and prime parking.  Group sales of 20 + are available upon request.  Price does not include gratuity or orders from the bar.
LOCATION: Alhambra Theater & Dining
12000 Beach Blvd.
Jacksonville, Florida 32246
(904) 641-1212
Posted by Ms. "V" Victoria Thomas Poller at 6:44:00 PM No comments:

Cummer Museum of Art and Gardens closed due to Hermine

Cummer Museum of Art & Gardens is closed through September 2, 2016 due to Hurricane Hermine. For the safety of the art, staff, and their visitors, Cummer will continue to evaluate conditions and open as soon as reasonably possible.  They will continue to keep the media updated on further closures of the Museum and operating hours.  Stay safe!