Rebecca Louise Law’s: ‘The Journey’ at the Cummer 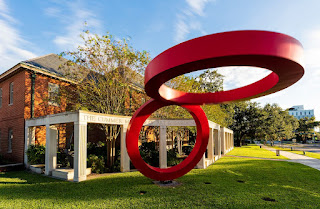 The Cummer Museum of Art & Gardens has commissioned British installation artist, Rebecca Louise Law, to create and implement a site-specific installation, using flowers and natural materials, exploring the relationship between humanity and nature. The exhibition will open to the public on Friday, July 30, 2021, and run through January 9, 2022.A proponent of sustainability, Law will incorporate 1.2 million flowers from her previous installations around the world in the creation of the Museum’s installation, which also requires more than 1,200 community volunteer hours to install.

“I want this installation to be a physical and participatory experience. After exploring the intimacy of the womb and the sensation of being consumed and cocooned in nature, I would like to explore the momentum of life,” said Law. “From the second we are formed in cells we are moving and changing, within a world that is also evolving. The motion of walking through nature and witnessing its many forms from life to death. This rhythmic cycle that we are all participants of, fascinates me. This installation will be a short journey through nature, with its many forms and scents, stimulating the senses to the extreme.”

“Law’s site-specific installation, The Journey, is a timely invitation to immerse ourselves in nature’s abundant splendor and soak in its awe-inspiring beauty,” said Andrea Barnwell Brownlee, Ph.D., the Museum’s George W. and Kathleen I. Gibbs Director and CEO. “In recent months, most have at times felt fragile, depleted and vulnerable. Law’s poetic installation, incorporating millions of delicate dried and fresh flowers that have been painstakingly linked together by hand, is an apt metaphor for our shared quest to emerge stronger and more resilient than ever. This exhibition promises to activate our senses and ignite collective joy. We are privileged to present an original installation by this internationally acclaimed artist, whose work introduces new dimensions to the Museum’s emphasis on art, gardens, and education.”

Law uses both dried and fresh flowers in her work to illuminate the time-bound and natural process of decay, which is an integral part of her practice. Inspired by the dried flowers that hung in her attic as a child, Law’s “sculptures” are suspended from above and held together with copper wire, which are assembled by volunteers.

The volunteer effort began in mid-July, with community members assisting with stringing together garlands of flowers and taking some ownership over the installation — an aspect of the project that the artist feels passionate about.

“The Cummer Museum is thrilled that so many community members jumped at the opportunity to take part in the installation of Rebecca’s exhibition,” said Holly Keris, the Museum’s J. Wayne & Delores Barr Weaver Chief Curator. “While community participation has always been an important component of her work, whether actively by wiring flowers or more passively through physically and emotionally immersing themselves in the finished product, it has taken on a new level of significance during the pandemic. I hope visitors experiencing this installation will take a moment to delight in the abundance of the Earth, marvel at the interconnectivity of people and nature and our individual roles within our community microcosm and contemplate our collective journey over the past year.”

About Rebecca Louise Law: Based in the Snowdonia National Park in Wales, Law has been commissioned to create installations at the Onassis Cultural Centre in Athens, Chandran Gallery in San Francisco, Kew Royal Botanic Gardens in London and in New York City’s Times Square, among other venues. Her work has been exhibited at a range of galleries and at major institutions, including the Royal Academy and the Victoria and Albert Museum in London.

8/25/21 Update:Alan Parsons Live Project featuring special guest Carl Palmer’s ELP Legacy at the Florida Theatre on September 11, 2021 has been postponed. We’re working with Alan to reschedule the show. Please see below for the official statement from Alan’s team:

“It is with regret the Alan Parsons Live Project announces the postponement of the US leg of their highly anticipated tour scheduled to occur in August and September.

While Alan and the band have been looking forward to performing for their fans throughout the United States, they extend their love and appreciation to all that were planning to come to these shows, and they cannot wait to see you all again when things are more predictable regarding the ongoing pandemic.

Please hang on to your tickets, they will be honored at the new rescheduled date, which will be announced shortly.”

The Florida Theatre is pleased to announce that "Carl Palmer’s ELP Legacy" has been added as a special guest for the Alan Parsons Live Project show at the Florida Theatre. Carl Palmer is among the most renowned drummers in rock history and a founding member of both Emerson, Lake and Palmer and Asia. Palmer will present bold, new arrangements of the best-loved instrumental music of ELP, and other composers. Carl Palmer’s ELP Legacy is a red-hot power trio that features Palmer on drums and percussion; guitarist Paul Bielatowicz and bassist Simon Fitzpatrick.

“I will deeply miss Keith and Greg, both of whom the world lost in 2016,” said Palmer. “It is now down to me to carry on flying the ELP banner and I will be playing that great music with my band for many years to come. The outpouring of support from ELP’s fans has been astounding, so, I felt I owed it to them to continue the music we made as a group.”

Headlining the show is Grammy award-winner Alan Parsons, who worked as assistant sound engineer on the last two albums by The Beatles. His band, The Alan Parsons Project, garnered commercial and critical acclaim for such certified Billboard Top 40 hit singles as "Eye in the Sky," “Time” and "Don't Answer Me", and “I Wouldn’t Want to Be Like You”, among other successes. It was Alan Parsons’ genius as a sound engineer for Pink Floyd’s Dark Side of the Moon that brought him to the attention of the music world but he has gone on to enjoy success as a producer, songwriter and performer.

One night only with 'QUEEN'

“One Night of Queen”, performed by Gary Mullen and The Works, and featuring the hit songs “Killer Queen,” “Bohemian Rhapsody,” “Another One Bites The Dust,” “Fat Bottomed Girls,” “Crazy Little Thing Called Love,” and more, is a spectacular live concert that recreates the look, sound, pomp and showmanship of one of the greatest rock bands of all time. This show will be for one evening at the prestigious Florida Theatre in downtown Jacksonville, FL.

“One Night of Queen” is a spectacular live concert, recreating the look, sound, pomp and showmanship of arguably the greatest rock band of all time.  Fans of Queen will delight in this note-for-note experience of mega-hits such as: “We are the Champions,” “You’re My Best Friend,” “Radio GaGa,” “Under Pressure,” and many others. One Night of Queen will Rock You!

Gary Mullen won ITV’s Stars In Their Eyes Live Grand Final, with the largest number of votes ever received in the shows history. He began touring on his own, and in 2002 formed a band The Works to pay tribute to rock legends Queen. Since May 2002, Gary Mullen & The Works have performed throughout the UK, USA, Europe, South Africa and New Zealand to sell-out audiences. They have also twice rocked the prestigious BBC Proms in the Park in front of a very enthusiastic crowd of 40,000. Today, Gary Mullen & The Works are the world’s premiere Queen tribute band.

**Please be aware that the Pit Seating is not available for this performance** Check about COVID protocol HERE!

Email ThisBlogThis!Share to TwitterShare to FacebookShare to Pinterest
Labels: Bohemian Rhapsody, Florida Theatre, Gary Mullen, Queen, We are the Champions 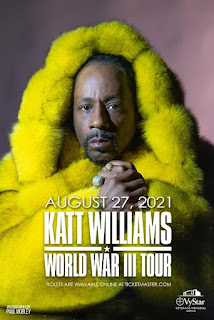 Comedy titan and Emmy® Award-winning actor, Katt Williams, announces his World War III Tour is coming to Jacksonville. Performing at VyStar Veterans Memorial Arena on August 27 at 8 p.m., Williams brings his unparalleled talents to the stage with new material that blends sidesplitting comedy with thought-provoking social commentary.With a career spanning over 20 years, Williams has earned a worldwide reputation as one of today's top entertainers, having developed a career seeded with thousands of sold-out arenas, an expansive list of starring roles on the small screen and memorable performances in major box office hits. His latest project, the comedy horror film “The House Next Door: Meet the Blacks 2,” follow-up to the 2016 indie hit “Meet the Blacks,” premiered June 11 and stars Williams along with Mike Epps, Snoop Dogg and Danny Trejo. The film earned numerous accolades on opening weekend including: #1 Comedy in North America, #1 highest-grossing new independent film release, and biggest opening for a feature film in less than 1,000 locations since March 2020.

Since performing his first stand-up show as a teenager, Williams has been taking the comedy world by storm. He quickly developed a unique style of standup that highlights articulate and sharp dialogue, rooted in conversations reflecting the American political landscape. By 1999, he had cultivated a loyal fan base and was performing on some of the most notable comedy stages in the nation. After conquering the stage, Williams shifted his focus into film and television. In 2002, Williams made his onscreen debut as a guest star on “NYPD Blue.” Soon after, Williams began to consistently book television appearances, before landing his first feature film role as Money Mike in “Friday After Next.” Following his breakout performance in the sequel to “Friday,” Williams captured the attention of directors, producers, and audiences in a major way, eventually racking up an extensive list of memorable onscreen appearances including “Father Figures,” “Norbit,” “Scary Movie V,” “Epic Movie,” “Bastards,” “Cats & Dogs: The Revenge of Kitty Galore,” “The Boondocks,” “Wild 'n Out,” and his guest role in “Atlanta,” which earned him a Primetime Emmy® Award for Outstanding Guest Actor in a Comedy Series.  Celebrated for his brilliance and ingenuity on stage, Williams is also known for his epic standup specials, including “The Pimp Chronicles,” “It’s Pimpin’ Pimpin’,” “Katt Williams: Pimpadelic,” “American Hustle,” “Priceless: Afterlife,” “Kattpacalypse,” and most recently, “Katt Williams: Great America” on Netflix.

The World War III Tour is presented by North American Entertainment Group Inc., one of the leading independent promoters of entertainment tours and live events in the United States.

About Katt Williams: Katt Williams is a comedian, actor, rapper and social activist who’s over-the-top, often polarizing brand of humor has made him one of the most in-demand entertainers in the world with a career spanning over 20 years and thousands of performances. In 2018, Williams returned to television with his critically acclaimed Netflix comedy special, “Katt Williams: Great America,” filmed in Jacksonville, FL. That same year, Williams earned a Primetime Emmy® Award for Outstanding Guest Actor in a Comedy Series for his guest role in “Atlanta” on FX. His latest project, comedy horror film “The House Next Door: Meet the Blacks 2,” the follow-up to the 2016 indie hit “Meet the Blacks,” premiered June 11 and stars Mike Epps, Williams, Snoop Dogg and Danny Trejo. The film earned numerous accolades on opening weekend including: #1 Comedy in North America, #1 highest-grossing new independent film release, and biggest opening for a feature film in less than 1,000 locations since March 2020. With ratings gold HBO Specials ("The Pimp Chronicles Pt. 1," "It's Pimpin' Pimpin'," "Kattpacalypse," "Priceless: Afterlife," "Katt Williams Live," "American Hustle"), Williams remains as one of the top touring comedians in the country as he embarks on his national World War III Tour, while adding to his list of on-screen achievements (“Friday After Next,” “Norbit,” “Epic Movie,” “Bastards,” “The Boondocks,” “Wild 'n Out”). To keep up with Williams, follow him on Facebook @KattWilliams and Instagram: @kattwilliams.