His birthday may have been on June 2nd, but he’ll be in Jacksonville, Florida in August, for one night only!  “Wayne Brady’s August show kicks off another great season for us at Thrasher-Horne Center,” said Executive Director Denton Yockey.  “Our goal is to put Thrasher-Horne Center on the map in Northeast Florida as a place to enjoy top-notch performances.”

For Wayne Brady, music and comedy seem to be at the center of his wildly successful and diverse career.  Wayne has been entertaining audiences with his singing, acting and unmatched improvisational skills for well over a decade.  This diversity has led to a career that goes beyond the term “triple threat.”  Brady has just completed singing and dancing in high heels while receiving rave reviews on Broadway in the role of Lola in the Tony award winning musical Kinky Boots.

Wayne began his career in Orlando working at theme parks as well as performing in several local theatre shows.  This is where his love for improvisation was sparked as he was a member of the Orlando improv comedy theater, SAK Comedy Lab.  In 1998, his career took off with Whose Line is it Anyway? for which he won a 2003 Emmy Award for Outstanding Individual Performance in a Variety, Musical or Comedy Series.  Wayne went on to host his own syndicated talk show The Wayne Brady Show for two seasons.  He was honored with two Emmys for Outstanding Talk Show Host and the show also won for Outstanding Talk Show.

In 2005, Brady returned to his first love, musical theater, and starred in the Broadway production of Chicago, playing the role of lawyer Billy Flynn.  He made a big splash in Las Vegas with his hit stage show Makin’ It Up.  The show was met with critical acclaim and has been heralded as “pure genius” and “hysterically funny.”  Brady has taken the show around the world playing in such countries as South Africa, Australia, New Zealand and India.  Wayne again returned to the live theater in 2010 when he joined the all-star cast in the Neil Patrick Harris directed Rent at the historic Hollywood Bowl.

Conquering stage and television was not enough for this unique talent.  He was nominated for a

Grammy in 2008 for his Best Traditional R&B Vocal Performance for his single “A Change Is Gonna Come,” off debut album A Long Time Coming.  In addition, Wayne released a children’s album entitled Radio Wayne which took the top spot on iTunes and Amazon kids charts.  On the big screen, Brady has been featured in several films including:  Crossover, Roll Bounce, for Fox Searchlight as well as the animated film Foodfight.

Being an award winning host, it is no wonder why he has been tapped to host several high-profile shows including the NAACP Awards, BET Honors as well as guest hosting The Late Late Show last year.   His role on the iconic Let’s Make A Deal has been garnered with several Emmy nominations including Wayne for hosting.

For one night only, the entire family can enjoy an evening of clean, humorous comedy.  Michael Jr. offers an amazing family-friendly show.  He has appeared on The Tonight Show, Comedy Central, Oprah, The Late Late Show, and at Christian venues such as: Catalyst Conference, Gateway Church and the Willow Creek Leadership Summit.  Michael Jr. will share his unadulterated wit at the Florida Theatre.

Michael’s entry into comedy was almost preordained.  Years ago, in a crowded Grand Rapids, Michigan movie theater; the projector malfunctioned.  The film snapped, the house lights came on, and acting on a dare, young Michael jumped in front of the restless crowd and took center stage.  When the theater manager tried to usher him out, the audience demanded he stay… and Michael Jr. discovered his gift.  He’s a man comfortable on any stage with material clean enough to work in churches, funny enough to work in clubs.

Jacksonville’s own, Comedian A-Train is your feature comic for the night.  He has entertained hundreds of thousands across the country since also starting his career on a dare.  His homegrown brand of comedy offers something for everyone.  As an emcee and corporate host/facilitator, his client list is extensive.  Cigna Global, United Way, WhiteWave and The City of Jacksonville are among a few of his satisfied clientele.  He is the first and only comedian in the city’s 38-year history to host the Jacksonville Jazz Festival in Jacksonville, Florida, the second largest jazz festival in the country and voted in the Top 20 Best.  He also just signed on as a partner bringing his exciting and entertaining comedy series to The Ritz Theatre and Museum.  He has performed with some of the biggest names in comedy. He’s a hit at churches, colleges, concerts and festivals.  His always clean, hilarious, and energetic set makes A-Train a perfect fit for every audience.

Danny Johnson, hosts this great night of laughs.  Often called a cross between Jackie Gleason and Jerry Seinfeld; he has entertained audiences at comedy clubs, corporate events, and churches nationwide.  Danny is an award winning comedian, author, actor, and voice-over artist who has performed for Comedy Central’s Laugh Riots, was a Florida’s Funniest Comedian semi-finalist, and winner of a Carnival Cruise Line Comedy Challenge.  His relatable, entertaining, standup has also garnered him opportunities to share the stage with many of the greats.  Get the family, your neighbors and your church groups ready to have some fun.
Another Jacksonville native and funny guy,


Performing Arts Studio presents a captivating new stage play "I'm Sick of Church Folk!" written by playwright Toni Diamond-Bingham and Kanesha Mitchell.  The event features all original songs and lyrics.  "I'm Sick of Church Folk!" is a captivating comedy/drama taking a hard look at one young woman’s struggle to settle in a new town with players and pretenders coming to God’s House.  This jaw-dropping-show is an experience of a lifetime that will be preceded by a deliciously catered dinner.

The show is about Adina, the mother of 2 young girls, who arrives in a new town looking to settle down and start a new life.  She joins the local church unknowingly becoming the subject of gossip, lies, and deception.  Writer Kanesha Mitchell plays the part of Sis. Blueberry, who is a gossiping mother of the church.  All of the lies, cheating, and gossiping has to stop.  When you come into the church, your mind should be on God and nothing more.  Come out and see how Adina copes with the church drama that you see in today's society.  You don't want to miss it!  It’s enough to make you Sick of Church Folk!

Be prepared to laugh and you might shed a tear, but you won’t want to miss this thought-provoking, gut-wrenching, heart-warming event; so get your tickets today.

Rare Diamonds Performing Arts Studio is a non-profit organization dedicated to teaching and developing artists in music and theatre in Jacksonville, FL.  They focus on providing the highest quality of entertainment by developing and nurturing talented individuals guiding them to their full potential.  Rare Diamonds Performing Arts Studio offers free classes in vocal music, stagecraft, and professional development.  RDPA believe that life can be expressed through art.  They will continue to strive to help aspiring artists achieve their goals in the performance arts industry.

LOUIS-AND-ELLA! will be in JAX for one night 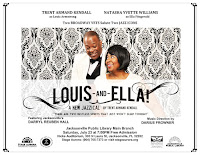 
Kendall currently stars as ‘OLD Deuteronomy’ in the international/ RCCL production of CATS, co-produced by Really Useful and directed by Trevor Nunn.  He recently appeared in concert with the ‘Black Stars Of Broadway’ at Carnegie Hall as a featured soloist for the Audelco Awards, and at the world famous Apollo Theater.  Trent is also the writer and star of ‘Picture Incomplete,’ a one-man musical that played to sold-out houses in Tampa, New Jersey, New York City and recently debuted internationally in Johannesburg, South Africa.

LOUIS-AND-ELLA! by Trent Armand Kendall is a musical celebration reuniting the Architect of Jazz and the First Lady of Song in heaven for one magical night.  These two friends and jazz pioneers rip through 24 of the most enduring standards of all time including: “Stepping Out,” “Cheek To Cheek,” “I Won’t Dance,” “Stardust,” “Stompin At The Savoy,” “What A Wonderful World” and more!

This musical presentation is sponsored in part by: the National Endowment for the Arts’ Challenge America Fast Track grant.  LOUIS-AND-ELLA! by Trent Armand Kendall is free and open to the general public, so add this venue to your calendars.

Natasha Yvette Williams stared as Matron Mama Morton, in Chicago on Broadway.  Recently she appeared in: A Night With Janis Joplin (Aretha Franklin, Joplinaire), The Gershwins’ Porgy and Bess (Mariah), The Color Purple (Sofia).  Williams has been a featured singer with the Indianapolis Symphony Orchestra, The Ottawa Symphony, The Edmonton Symphony, The Naples Philharmonic, The Baltimore Symphony Orchestra, and the New York Pops in the production of Irving Berlin: Rags to Riches.