Drumline Live 2017 had a preshow that was topnotch 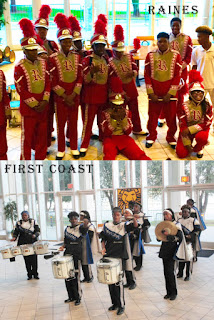 Raines High School and First Coast High School rank number one as the Jacksonville Florida WINNERS of the Drumline Live student competition.  For those who arrived early for Drumline Live, there was a very special treat as each patron waited to go into the Moran Theatre.  From the lobby, you could hear the melodic sounds of horns, cymbals and the thunder of drums that came from the students’ instruments.

The preshow was entertainment all by itself!  There are so many talented youths here in JAX, and a few of them came out to prove it on March 28, 2017.  As a reward for doing what they like, the students (and chaperones) from both schools were rewarded tickets in the orchestra section of the Theater. 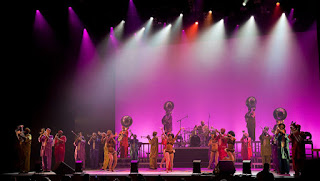 Below are a few questions that Mr. Washington (Band Director from Raines High School) was so gracious to answer on a busy school day.  As you will see from the video, Raines was a well-deserved recipient of a night out-on-the-town.

Q: Who actually won the “2017 Drumline of the Year: Jacksonville”?  You or First Coast High School?
A: There wasn't a winner, it was just an exhibition to represent Duval High School drumlines.
Q: Were the students able to meet with the Drumline Live Cast Members, and what type of questions did they have?
A: The students were able to meet with the cast members to discuss various percussion techniques and methods of playing as well as talk about the cast members experiences as a performer.
Q: How did the students enjoy their free tickets to the show?  The students enjoyed themselves very much and were thrilled with the opportunity to play for the community.
A: What does (S.O.E.) stand for in the description of your Marching Band? Sound of Experience
Q: Could I get the YouTube video link for the audition tape?
A: You Tube audition footage. 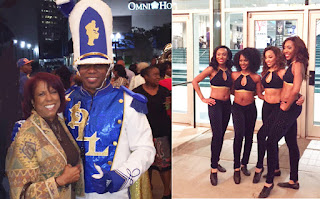 Drumline Live kicked off its third US tour with a return engagement to the Times-Union Center.  Jacksonville Florida was privileged to have this versatile group of musicians and dancers back in January of 2011.  This time the troop gave visual reels of Michael Jackson, Prince and much more.  The group gave a stellar performance outside the Times Union Center, across from the Omni Hotel, at the end of their show.  Hear what the neighbors heard right HERE!

Drumline Live brought athletics and high energy to the stage with a mixture of sounds ranging from contemporary, Big-Band, hip-hop, blues, swing, gospel, the Motown sound and traditional brass.  Qualified professional musicians played Brass Instruments (Euphoniums, French Horns, Basses, Trombones, Trumpets and Saxophones) and Percussions while dancers graced the stage with beauty and elegance.  If they come to town again, you better get your tickets.  There’s always something new with this HBCU experience.
Posted by Ms. "V" Victoria Thomas Poller at 4:37:00 PM No comments:


Grab your dancing shoes and get ready to participate in a 12 Hour and 9-minute Dance Marathon. University of North Florida (UNF) will be hosting its ninth annual event on Saturday, April 1, 2017 from 10 a.m. to 10:09 p.m. at the UNF Field House.  Proceeds benefit the two local Children’s Miracle Network Hospitals - Wolfson Children’s Hospital and the pediatric programs at UF Health Jacksonville.

To honor all children being treated at the local CMN Hospitals, students will stay on their feet for 12 hours and 9 minutes.  The 12 hours signify the typical shift of dedicated hospital staff while the 9 minutes tributes the event’s ninth year in the Jacksonville community.  To keep dancers motivated, miracle children impacted by the hospitals will make special visits throughout the day to share their unique journey and interact with all participants.  There will also be games, entertainment and, of course, dancing!

Opening ceremonies begin at 10 a.m. and are free and open to the public.  After 11 a.m., visitors are asked to donate $5 per hour at the door to CMN Hospitals.  The event concludes in a symbolic closing ceremony with miracle children cutting off the dancers’ ID bands beginning at 9:30 p.m.  You can register to participate or to donate HERE! 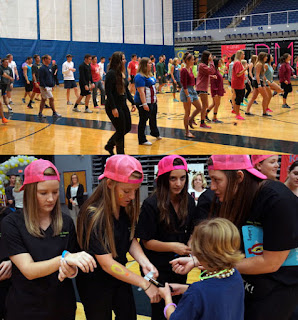 Dance Marathon is a nationwide movement involving college and high school students at more than 300 schools.  These students spend a year learning invaluable leadership and life skills while raising funds and interacting with children’s hospital patients and families.  More students participate in Dance Marathon than any other student-led philanthropy in the United States.  Since its founding in 1991, this movement has raised more than $80 million for CMN Hospitals.

About Unf Dance Marathon: Started at the University of North Florida in 2008, UNF Dance Marathon team and students have raised more than $160,000 for CMN Hospitals.  All of the funds raised by the students stays local at Wolfson Children’s Hospital and the pediatric programs at UF Health Jacksonville.  UNF Dance Marathon’s motto: “Can’t Stop, Won’t Stop” especially when it is “FTK-For The Kids!”

About Children’s Miracle Network-Jacksonville: Children’s Miracle Network Hospitals is dedicated to improving the health and welfare of all children by raising funds and awareness for Wolfson Children’s Hospital and the pediatric programs at UF Health Jacksonville. A founding principle of CMN Hospitals is that all funds raised in a community stay in that community. Therefore, all donations made in Northeast Florida/Southeast Georgia are used to purchase medical equipment, child life activities and educational resources for both local pediatric programs.
Posted by Ms. "V" Victoria Thomas Poller at 11:35:00 AM No comments:

MJ LIVE! will be in Jacksonville FL for brief engagement 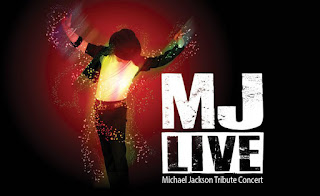 MJ LIVE! the Michael Jackson Tribute Concert comes to Jacksonville’s Times-Union Center for six performances only and is sponsored by VyStar Credit Union.  Live from Las Vegas, featuring all his biggest hits including: "Bad, Billie Jean, Beat It, Dangerous, Smooth Criminal, Black & White, I Want You Back" and many others, relive the energy, excitement, spectacle and pure joy of this legendary superstar and his music.  Witness the awesome sound, lighting and effects. Feel the energy from the MJ LIVE! band and mega talented MJ LIVE! dancers.  Sing along to some of the greatest hits of all time. 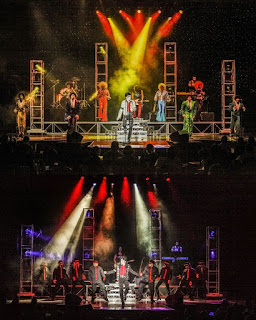 Special ticket pricing is available! Patrons can now buy an adult ticket and get a child’s ticket free with promo code MJ* (See below)


SPECIAL PRICE TICKETS: *Offer is 50 percent off purchase of two tickets (one adult and one child 12 and under) plus facility fee and service charge; facility fee and service charge not discounted. Valid for all performances. Subject to availability. Restrictions apply, not valid on previously purchased tickets, and cannot be combined with any other offer.  Promo code MJ expires at 3 p.m. on each show day (April 20-23) or may be withdrawn at any time. 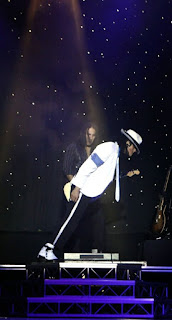 Spring has sprung here in Jacksonville Florida.  The Florida Theatre is one venue that has some outstanding acts for you during this 2017 Springtime in April season.  Don’t forget that theater tickets make great Graduation presents, Birthday gifts, Anniversary celebrations, and ‘Just Because’ rewards.  Take a look at the selections below, and make your ticket-wish-list for you and that favorite person you know and see.  Click here for a sample of the upcoming Pokémon Symphonic Evolutions.

April 9 – 8pm — The Who’s Tommy: A Bluegrass Opry performed by The Hillbenders.  With only a banjo, dobro, mandolin, bass and guitar, Bluegrass artists The Hillbenders bring the same energy and vision to The Who’s classic album Tommy.  For this intimate performance, patrons will sit on the Florida Theatre stage with the band.

April 11 – 7:30pm — Bruce Hornsby and The Noisemakers.  This Grammy- award winning musician is known for his hit songs: “The Way It Is,” “Mandolin Rain,” “Look Out Any Window” and “The Valley Road.”  An unofficial member of the Grateful Dead, he has played more than 100 shows with the band.

April 22 – 8pm — Tower of Power.  Horn-driven funk band Tower of Power is best known for their hits: “You Got to Funkifize,” “What Happened to the World That Day?,” “You’re Still a Young Man,” “So Very Hard to Go,” and “This Time It’s Real.”

April 23 – 7:30pm — Alton Brown: Eat Your Science.  For his all new stage show, famed Chef and TV host of: Good Eats, Cutthroat Kitchen, Camp Cutthroat and Iron Chef America.  Alton Brown uses his famous knack for mixing together a perfect base of science, music and food into two hours of pure entertainment.

April 26 – 8pm — Marsha Ambrosius  and Eric Benét : M.E. Tour 2017.  Platinum-selling recording artists and songwriters Marsha Ambrosius and Eric Benét unite.  Since her success with soul music group Floetry, Marsha Ambrosius has been nominated for six Grammy awards and topped the R&B charts with: “Far Away,” “The One,” and “Late Nights & Early Mornings.”  Grammy nominee and contemporary R&B artist Eric Benét is best known for his hits: “Spend My Life With You,” “Sometimes I Cry,” and “I Wanna Be Loved.”