‘Joanne Shaw Taylor’ brings her talent to the Ritz 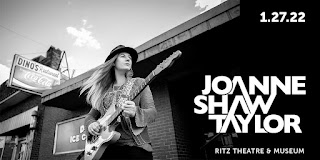 “I’d known from the beginning of my recording career that one day I wanted to record an album of blues covers, I just wasn’t sure when the right time to do that would be,” says Joanne. “I’ve always found it far easier to write my own material than come up with creative ways to make other artists’ material my own.”

When the pandemic put the brakes on from musicians from touring during 2020 and most of 2021, Joanne thought it was the right time to head into the studio to record The Blues Album.

“We wanted to make a tough vocal centric straight blues record that showcases Joanne’s amazing talent but in a slightly different light,” explains Joe Bonamassa, producer. “Joanne is a dear friend and a superstar. Josh and I focused on testing her limits and pushing boundaries that might not have occurred before. It's all about making a statement and having the listener want to play the music repeatedly.” “We try not to live in the well-worn trails of the blues,” explains Bonamassa. “Each song has to has to stand on its own while paying tribute to the original masters.”

“Joe made it known from the get-go that his main objective for this album was to push me as a singer,” recalls Joanne. “Obviously, Joe has seen me perform many times over the years and knows my voice well. I think he felt that he could my vocal performance more, and get more out of it, especially since I’d had over a year to rest my vocal cords.”