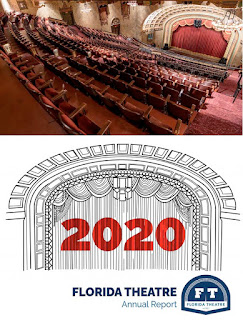 The Florida Theatre has released its annual report for the fiscal year that ended on September 30, 2020. The report is a digital publication that was emailed to the theatre’s supporters on February 3, 2021, and is available to the general public on the theatre’s web site, floridatheatre.com.

The Florida Theatre Performing Arts Center, Inc. is the nonprofit corporation that has managed and programmed the historic Florida Theatre in downtown Jacksonville since 1987 in a public/private partnership with the City of Jacksonville, which owns the building.

Says Florida Theatre President Numa Saisselin, “As a nonprofit corporation, we exist to serve the public, not a private investor or owner, and we believe in transparency. Even though private contributions are just 13% of our operating income, and government support is less than 5%, we still want our donors and supporters to know exactly how we are doing, so they have confidence in our ability to deliver the community service they expect.”

Among the highlights of this year’s 20-page report:

·         Even though the theatre was closed for more than half the year in response to the COVID-19 pandemic, its artist selections were still strong enough to earn it recognition as one of the most attended theatre venues in the country by two industry publications, Pollstar (Top 10 up to 2,000 seats) and VenuesNow (Top 5 up to 2,000 seats).

·         Even though not having a show after March 12 caused the organization to lose over 95% of its income, the organization still managed to be financially viable in part because 100% of its Corporate Partners renewed their annual memberships, and the number of individual people making a membership contribution fell by just 5%.

Says Saisselin, “That is a strong statement about the importance of the Florida Theatre in our communal lives.”

The historic, nonprofit Florida Theatre is sponsored by Community First Credit Union. For a complete list of upcoming events or to buy tickets visit the Theatre's official website.