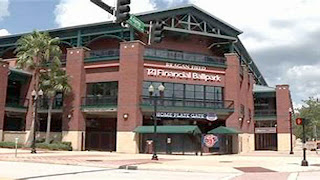 The University of Florida and the University of Georgia in partnership with the City of Jacksonville, ASM-Global Jacksonville and 121 Financial Ball Park announced that they will be playing their annual Florida vs. Georgia fall baseball game on Friday, October 29 at 121 Financial Ball Park with the first pitch happening at 6:30 PM. This game will be played ahead of the annual Florida vs. Georgia rivalry football game on Saturday, October 30 at TIAA Bank Field.

Tickets for this year’s baseball game will be priced at $15 and will go on sale this Friday, September 10 at 10 A.M. on Ticketmaster.com.

Additional information and details about activities taking place in Jacksonville during Florida vs. Georgia weekend will be announced in the coming weeks.

About Florida–Georgia: The Florida-Georgia football rivalry is an American college football rivalry game played annually by the University of Florida Gators and the University of Georgia Bulldogs. The game was first played in 1915, and has been played every season since 1926, except for a war-time interruption in 1943. This match-up between Southeastern Conference opponents is one of the most prominent rivalry games in college football, and has been held in Jacksonville, Florida since 1933, with only two exceptions, making it one of the few remaining neutral-site rivalries in college football.